Lorraine P. Siefken, 93, of Iowa Falls, formerly of Wellsburg, passed away peacefully with her family by her side on Wednesday, December 2nd at the Heritage Care Center in Iowa Falls. A funeral service will be held on Saturday, December 5th at 11:00 AM at the St. Paul's Lutheran Church in rural Wellsburg. Visitation will be held one hour prior to the service at the church. Burial will follow the funeral service at the church cemetery. Memorials may be directed to the church.

Lorraine was born on February 24, 1922 in Titonka, Iowa, the daughter of Harm S. & Minnie (Senne) Harringa. She grew up in Titonka where she graduated from the 8th grade and later attended Catechism for 2 years. Her first job was housekeeping for her uncle and she later worked as a nurse's aide at Mercy Hospital in Mason City. On November 24, 1946, Lorraine was united in marriage to Donald Siefken in Titonka. The couple welcomed three children into their family. They made their first home in Cleves and re-located to Wellsburg in 1946. She worked various jobs throughout her life and owned and operated her own upholstery business in Wellsburg for 13 years.

She enjoyed sewing, flower and vegetable gardening, canning and sharing her produce, and playing cards. Her true joy in life came from spending time with her family, especially her many grandchildren. 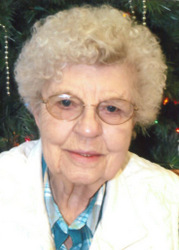