Lee William Wrich, 12, of rural Aplington, Iowa, died Sunday December 11, 2005, at Sartori Memorial Hospital in Cedar Falls, Iowa, from injuries sustained in a shooting accident. Funeral Services will be 1:30 P.M., Friday, December 16, 2005, at the First Baptist Church in Steamboat Rock, Iowa, with Pastor Harrison Lippert and Pastor Bryce Roskens officiating. Private family burial will be in the Sheller Cemetery, rural Eldora, Iowa. Visitation will be Thursday, December 15, 2005, from 3:00 P.M. until 7:00 P.M. at the Doyen-Abels Funeral Home in Wellsburg, where the family will be present to greet friends. A memorial fund has been established.

Lee W. Wrich was born February 11, 1993, in Marshalltown, Iowa, the son of Wayne J. and Gwen L. (Siert) Wrich. He was raised on a farm in rural Aplington in Grundy County, Iowa, and was currently a student in the seventh grade at the Ackley-Geneva-Wellsburg-Steamboat Rock Middle School in Wellsburg. Lee was a member of First Baptist Church in Steamboat Rock, where he was actively involved in Awana, receiving the Timothy Trophy. He was also active with the middle school youth, and was a member of the Wellsburg Jr. Farmer's 4-H Club. Lee was a talented violinist, playing often for church services on Sunday, and for family and friends. 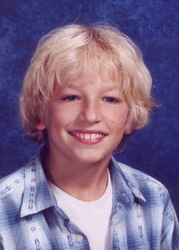