Caroline Johanna Ellison Dew was born December 28, 1899, the daughter of Ole and Martha (Reinke) Ellison at Berlin, Iowa, now known as Lincoln, Iowa. She attended school at Berlin and then graduated from Reinbeck High School in 1917. On February 18, 1918, Caroline was united in marriage to Glenn R. Dew at her parent's home. They made their home on the farm in rural Grundy County-in the Lincoln and Dike area for several years. They retired and moved to Grundy Center in 1947. Glenn died in January 1985 and Caroline lived alone in their home until November 1991 when she became a resident of Long Term Care at the Grundy County Memorial Hospital.

Caroline had been a past member of the Presbyterian Church in Morrison, Iowa, and had currently been a member of First Presbyterian Church in Grundy Center. She had been a member of the Gold Crimson Circle at church. Caroline had been a Gold Star Mother and was the last Gold Star Mother in Grundy Center, and had also helped to promote the Grundy Center American Legion poppy sales for many years. Caroline enjoyed gardening and flower arranging and was a charter member of the Grundy Center Garden Club. She shared many of her bulbs, plants, or arrangements with family and friends. There wasn't a flower that Caroline didn't try to grow. Caroline was also an excellent cook and was a believer in making healthy meals for her family. Extra hired men during the busy farming season kept her actively preparing meals. Good food, strong German and Norwegian genes and keeping busy were her ingredients for a long life. Caroline's motto was "Enjoy today. Yesterday is gone and tomorrow may never come."

She was preceded in death by her parents, her husband Glenn in 1985, one sister in infancy Adella Ellison; one brother Wilfred Ellison; two sons Robert Dew and Kenneth Dew; two grandchildren in infancy Mary Ellen Dew and Roger Ellison Dew; and one great-grandchild Lynsee Potter. 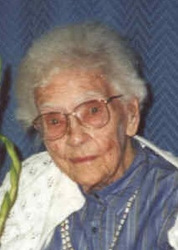