Donn E. Lorenzen, 78, of Hudson, Iowa, died Sunday, December 2, 2012, at the University of Iowa Hospitals and Clinics in Iowa City, Iowa after a courageous battle with acute leukemia. Funeral services will be at 10:30 am on Thursday, December 6, 2012 at St. John's Lutheran Church in Reinbeck, Iowa with Pastor Bruce A. Boyce officiating. Burial will follow in the Reinbeck Cemetery. Visitation is from 5 pm to 8 pm on Wednesday, December 5 at French-Hand Funeral Home in Reinbeck.

Donn was born June 10, 1934 on the family farm near Reinbeck, son of Elmer and Ada (Hanisch) Lorenzen. He graduated from Reinbeck High School in 1952 and from Iowa State University in 1956 with a degree in Farm Operation. On June 20, 1955 Donn was united in marriage to Marian Philp in Reinbeck.

He accepted a job with John Deere and worked most of his 40 years in diesel engine development work at the Product Engineering Center (PEC). He was a member of St. John's Lutheran Church.

He was preceded in death by his parents and his twin brother, William. 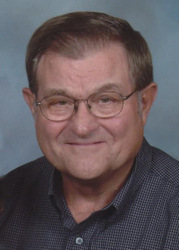