On December 29, 2012 at 11:30 A.M., Beveridge Carl Nickerson left his earthly home and was reunited with his beloved parents John Carl & Jessie (Baxley) Nickerson, his brother and sister-in-law, J. Paul & Marjorie (Daniels) Nickerson and many, many other family members and friends who pre-deceased him.

Beveridge was born in Grundy Center on April 14, 1926 and graduated from Grundy Center High School in 1944. In 1950, Nick joined the U.S. Army and served for 2 years during the Korean Conflict. After receiving an honorable discharge, he resumed his long career as a type-setter/printer for the local paper as well as the Marshalltown newspaper. He was a member of the United Methodist Church for his entire life and sang in the choir for over 60 years where he held many offices and served on many committees.

He also served on the boards of the Sunrise House, Friends of the Library and the Grundy County Memorial Hospital Volunteers. In 2011, he received a Governor's Volunteer Award from Gov. Terry E. Branstad during a special recognition ceremony held in Waterloo. The award was received for having volunteered over 1,000 hours at Grundy County Memorial Hospital.

Nick never wanted anyone to worry about him but the family wants to thank those people who did so anyway. We are forever in your debt. Those who wish may make a contribution in his name to any of the above listed organizations which he served. 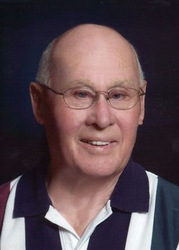