Pearl Berniece Buseman, 89, of Grundy Center, passed away on Monday, March 11, 2013 at the Grundy County Memorial Hospital Long Term Care Unit. Funeral services will be held on Friday, March 15, 10:30 A.M. at the Bethany Presbyterian Church in Grundy Center. Burial will follow at Rose Hill Cemetery. Visitation will be held Thursday, March 14, from 5 P.M. to 7 P.M. at Engelkes-Abels Funeral Home in Grundy Center, Iowa. A memorial fund has been established.

Berniece was born June 10, 1923 in McGirk, Missouri, daughter of James and Clara Reece. She was raised and educated in California, Missouri, where she graduated from high school in 1941. On November 14, 1943, Berniece was united in marriage to George Buseman in Douglas, Wyoming where he was serving in the U.S. Army during World War II. The couple moved to Grundy Center in 1950 where they made their home.

Berniece was a lifelong member of the Bethany Presbyterian Church where she and George both served as Sunday School teachers for many years. They were both very active in the American Legion and will be fondly remembered for their dedication and service both locally and throughout the State of Iowa.

Berniece will be especially remembered for her participation in the Legion's Annual Poppy program. In addition, she will be remembered for her dedication and service to the Iowa Veteran's Home in Marshalltown, Iowa as a staff volunteer for over 20 years.

Berniece owned and operated Buseman's Flowers for over 25 years. During this time she shared her talents by making, donating and delivering corsages to area Nursing Homes. She also was a Sales Associate for Stanley Home Products for over 45 years.

She was preceded in death by her parents; husband George and sister Lucille Bittick. 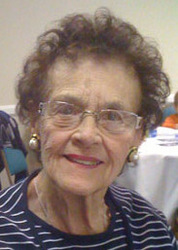