Lavina Alene was born September 10, 1926, in rural Tama County, the daughter of Grover and Emma (Wiebensohn) Volkens. Lavina grew up in rural Tama County attended country school through the 8th grade. She then attended school in Reinbeck graduating from Reinbeck High School. Upon graduation she worked as a secretary in Waterloo, IA, Long Beach, CA. and Cedar Rapids, IA. On February 14, 1949, Lavina was united in marriage to Charles Rohach at St. Mary's Catholic Church in Marshalltown, Iowa. After marriage they lived, worked and raised a family on a farm near Lincoln until 2008. Then moved to Westview Estates where she resided until 5 weeks preceding her death at Parkview Manor. She was member United Church of Christ and Oak Leaf County Club for many years.

Lavina enjoyed Polka music and dancing, playing cards, sewing, traveling, gardening and playing golf. Most of all her family was a priority in her life.

She was preceded in death by her parents; husband Charles on July 5, 2008. 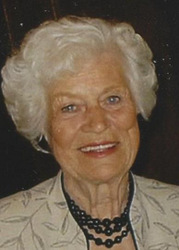