On August 18, 1945 Vail married Lorraine Kathryn Taylor at her parent's home. He spent his life with Lorraine on their farm in Grundy County. He committed his life to Jesus Christ at an early age. This commitment was central to his life after that. Lorraine passed away in 2006.

Vail enjoyed working the portion of ground that God allowed him. He also had been involved for several years with the Grundy County Farm Bureau and Grundy County Republican Party.

He was preceded in death by his loving wife, parents, Ernest and Fanny Hess, Brothers, Gerald and Gordon and Sisters, Cecile Lindsey and Carol Timm. 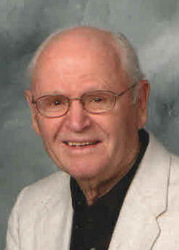