Dana Rosann Speicher, 57, of Eldora, died on Saturday, May 4, 2013 at the Eldora Nursing and Rehab Center in Eldora while under the care of Care Initiatives Hospice. A memorial service will be held at 10:30 a.m. on Thursday, May 9, 2013 at the Liscomb Church of Christ in Liscomb, IA. Burial will be held privately by the family.

Dana was born on September 2, 1955 in Grundy Center, Iowa to her parents Merle and Anabel Speicher. She was raised in Union, Iowa and graduated from Union-Whitten High School with the Class of 1973. Dana earned her LPN Degree from Marshalltown Community College. Dana worked for six years at the Marshalltown Medical & Surgical Center, she then went to work for the Iowa Veteran's Home in Marshalltown, Iowa until health issues forced her to retire.

Dana was a member of the Liscomb Church of Christ, where she was baptized in 1996. She enjoyed sewing, basketball, collecting antiques, traveling within the U.S. and especially the Iowa Hawkeyes. Her true joy in life came from spending time with her friends and family.

She was preceded in death by her father Merle. 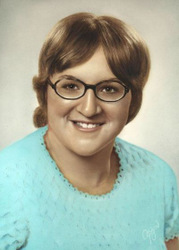