Dave was born on November 27th, 1956 in Grundy Center, Iowa, the son of Louis Frank & Junice (Gunnarson) Hartke. A lifelong Grundy Center resident, Dave attended school in Grundy Center, graduating with the class of 1975. He went on to further his education, obtaining his two year Associate's degree at Hawkeye Community College in Waterloo. On August 30, 1980, Dave was united in marriage to his high school sweetheart Lisa Stumberg at the Bethany Presbyterian Church in Grundy Center. The couple welcomed a son and two daughters into their family. He worked for Ritchie's in Conrad, Chamberlain in Waterloo, Viking Pump in Cedar Falls and most recently at Lennox in Marshalltown as a quality control engineer.

He enjoyed fishing, boating, spending time with family and friends at his lake home but what brought the most joy to Dave's life was the love he had for his family. Dave was funny, hardworking and most of all caring. He will be forever loved and missed by those he leaves behind.

He was preceded in death by his father Louie Hartke. 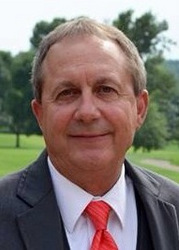