Carla L. Nash, 10, of Charles City, died Sunday, March 9, 2014 at the Floyd County Medical Center in Charles City. Funeral services for Carla Nash will be held 1:00 p.m. Friday, March 14, 2014 at St. John Evangelical Lutheran Church in Charles City. Pastor Dennis Niezwaag will officiate. Friends may call at the Hauser Funeral Home from 5-8 p.m. Thursday, March 13, 2014 and one hour prior to the service at the church on Friday. A Mass of Christian Burial will be held 10:30 a.m. Monday, March 17, 2014 at the St. Gabriel Catholic Church in rural Reinbeck followed by burial in the church cemetery. Reverend David Kucera will officiate. Visitation will be held at the French-Hand Funeral Home in Reinbeck from 3-6 p.m. Sunday, March 16, 2014 where a Scripture Service will be held at 6:00 p.m. Visitation will continue one hour prior to the Mass at the church on Monday.

Carla Lynn Nash was born May 27, 2003 in Cedar Rapids, Iowa, the daughter of Eric Nash and Dee (Bruno) Breitkreutz. She was raised in Charles City and Cedar Falls and was currently in 4th grade at Lincoln Elementary School in Charles City. Carla really enjoyed being outdoors whether it was skating, swimming, bike riding or just spending time with her friends. She liked listening to music and playing with different programs on the computer. Carla loved spending time with her family and friends and always wanted to get together as often as possible. She was an animal lover and had many pets to prove it. Carla really enjoyed having her cappuccino in the morning and a Hershey bar after school. She will be missed by all who loved her and knew her. 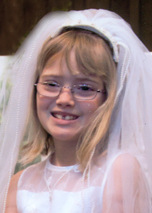