Lois Mae Erpelding, 93, of Waterloo, formerly of Dike, passed away on Saturday, March 22nd at the Covenant Medical Center in Waterloo. A memorial gathering of friends and family will be held on Friday, March 28th from 4 to 7 P.M. at the Friendship Village Cove in Waterloo, 3720 Village Place, Waterloo, IA 50702. A graveside service will be held on Friday, May 9th at 1:00 P.M. at the Elmwood Cemetery in Dike. The Engelkes-Abels Dike Chapel is in charge of arrangements.

Lois was born on April 14, 1920 in Grundy County, Iowa, the daughter of Henry W. & Tena (Meyer) Schulta. She married James Erpelding on October 16, 1945. He died October 6, 1996. Lois graduated from Grundy Center High School and attended classes at the Iowa State Teachers College at UNI in Cedar Falls. She taught school in Grundy County for 17 years. Later, she owned and operated the Grundy County Insurance Agency in Dike for 16 years.

Lois was a member of the Dike United Methodist Church for more than 60 years. She became a resident of Friendship Village Retirement Home in December of 2001, where she remained until her passing.

She is survived by her sisters Ella Petersen of Lincoln, NE and Jo Ann Weatherly of Waterloo; one brother Elmer (Ruby) Schulta of Grundy Center; her husband's sister Betty Warren of Waterloo; 14 nieces and nephews.

Lois was preceded in death by her husband Jim; two sisters Milda Getting & Lillian Brand Wenger. 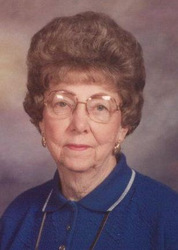