Theresa was born on March 30, 1919, to George and Davida (Sonius) Meyer. Theresa grew up in the Wellsburg area, and graduated from Wellsburg High School. Upon graduation, she attended the Teacher's College in Cedar Falls, Iowa. Theresa then began a career as a teacher. Theresa taught at the Pleasant Valley No. 9 country school near Wellsburg. On September 3, 1941, Theresa married Alvin Harms, and they made their home on a farm near Wellsburg for 20 years, before moving into town. After Alvin's death, Theresa made her home in Morris, Illinois to be closer to family.

Theresa was preceded in death by her parents, husband Alvin, and brother Harry.

Funeral services will be held at 11:00 am, on Tuesday, August 12, at St Johns Lutheran Church, in Wellsburg. The family will greet friends one hour prior to service at the church. Burial will follow at Shiloh Cemetery. Memorial contributions may be directed to the family. 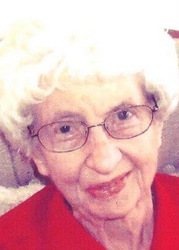