Kenneth W. Pappas, 40, formerly of Grundy Center, passed away on Wednesday, August 6, 2014, at the University of Iowa Hospital in Iowa City. Visitation will be held on Monday, August 11, 2014 from 5 to 7 P.M. at Engelkes Abels Funeral Home in Grundy Center, Iowa with a 6:30 P.M. scripture service. A Mass of Christian Burial will be held on Tuesday, August 12, 2014 at 10:30 A.M. at St. Gabriel Catholic Church, 21275 U Ave. Reinbeck, IA. Burial will follow the funeral mass at the St. Gabriel Church Cemetery. Memorials may be directed to family.

Kenny, as he was known by his family and friends, was born on February 11, 1974 in Cedar Falls, Iowa. He was raised in Grundy Center and attended Grundy Center Schools and graduated from Grundy Center High School. He was united in marriage to Samantha Dean on August 3, 2001. They later divorced.

Kenny had worked for several different Trucking Companies as an over the road driver, which he truly enjoyed.

Kenny was a big science fiction fan, especially Star Trek. He enjoyed motorcycle riding, but his true passion was boating and fishing.

He is survived by his parents, Ron and Colleen Pappas; paternal grandmother, Catherine Pappas and many aunts, uncles and cousins.

He was preceded in death by his paternal grandfather, Thomas Pappas; maternal grandparents, Wesley and Myrna Freed. 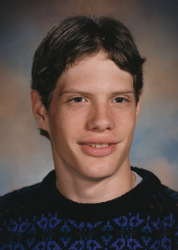