She was born February 28, 1917 in Melrose Township in Grundy County to Robert and Gladys (Newell) Hess. Doris grew up on a farm in Melrose Township. She graduated from Wellsburg Community School in 1935. Doris was married to Basil Snyder on February 14, 1936 in her parents' house in Melrose County.

Doris lived a very full and rewarding life. Basil and she farmed in Melrose and Shiloh Townships in Grundy County while raising their four daughters. Doris was quite the home-maker. She had a huge garden and along with it came canning and freezing. She could also be found working in the fields and doing chores alongside Basil. She was a great cook and baker. She also was a 4-H Leader and active in the Farm Bureau. She loved to sew and made many of the clothes for her daughters. She quilted, sewed and knitted. She loved to travel throughout the United States and made one trip to Europe.

She was a member of Ivester Church of the Brethren and the Cheerful Helpers Sunday School Class. She also attended the Alice Church of God and most recently would attend the United Reformed Church with her daughter. She was a member of the Kappa Iota Club. She loved to bowl as well as play bingo and cards.

Her family would like to express gratitude and thankfulness to her many friends who helped her live and enjoy a long fulfilling life. 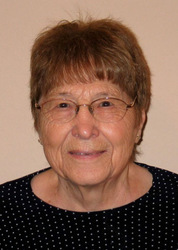