Harlyn D. Meester, age 82, of Grundy Center, Iowa, passed away at home on Wednesday, October 8, 2014 while under the care of Cedar Valley Hospice. A funeral service will be held at 10:30 A.M. on Monday, October 13, 2014 at the Pleasant Valley Reformed Church in rural Holland, Iowa. Burial will follow at the Pleasant Valley Reformed Church Cemetery with military honors conducted by the Ackley American Legion Elliot Keninger Post # 252. Visitation will be held from 4:00 P.M. until 7:00 P.M. on Sunday, October 12, 2014 at the Engelkes-Abels Funeral Home in Grundy Center.

Harlyn was born on September 4, 1932 at the family homestead in Grundy County, Colfax #4. He was the son of Henry H. and Grace (Meyer) Meester. Harlyn was raised and educated in Grundy County and graduated from Dike High School in 1951. Harlyn served his country in the United States Army from 1952 until 1954. He served in Korea during the Korean Conflict. Upon his honorable discharge from the Army he returned to the States and was united in marriage to Edna Aguilar on December 29, 1955 in Center, Colorado. They made their home in Grundy County, Iowa and welcomed three children into their family.

Harlyn worked his entire life on the family farm. In addition to farming the land he also was involved with dairy farming and raised livestock. He retired from farming in 2003 and moved to Grundy Center that same year. After retirement Harlyn enjoyed helping on the family farm for many years.

Harlyn was a lifelong member of the Pleasant Valley Reformed Church, where he served as a Deacon. He was on the Board of Directors for Swiss Valley Farms for a number of years. He was a member of the Ackley American Legion Elliot Keninger Post #252, the Aplington AMVETS Post #102 and a member of the Fraternal Order of Eagles #4299 in Lake Havasu City, Arizona.

He loved to travel especially to Lake Havasu City, where he enjoyed 25 wonderful winters. He enjoyed collecting antiques and golfing. He was a very friendly man who enjoyed people and spending time with his friends and family.

He was preceded in death by his parents; his wife Edna; his sisters Matilda Schmitt and Viola Johnson; his brother Melvin Meester and his sister Marilyn Meester in infancy. 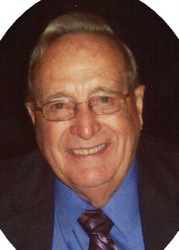