Beverly Ann Edith Christiansen, 84, of Reinbeck, Iowa, died Monday, October 20, 2014, at Covenant Medical Center in Waterloo, Iowa. Funeral Services will be held at 10:30 a.m. on Thursday, October 23, 2014 at the Reinbeck United Methodist Church, with Pastor Terry Plocher officiating. Visitation will be held on Wednesday, October 22, 2014 from 5:00 P.M. to 7:00 P.M. at French-Hand Funeral Home in Reinbeck. Memorials may be directed to the family.

Beverly Ann Edith was born April 27, 1930, in Chicago, IL, the daughter of Harold and Ania (Slutz) Palmer. Beverly grew up in Chicago area and then moved to Iowa where she was raised by her grandparents Ed and Clara Scovel. On April 26, 1947, Beverly Ann Edith Palmer-Scovel was united in marriage to Carl H. Christiansen in Cedar Falls, Iowa. They were married for 62 ½ years. She was a member of Reinbeck United Methodist Church. Beverly also enjoyed baking, painting, garage sales, playing the accordion and her pet cats Beauty and Patches. Most of all she enjoyed spending time with family.

She was preceded in death by her husband Carl, her parents, a sister and two brothers. 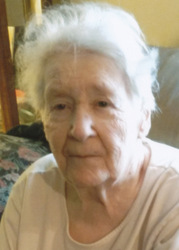