Donald G. Steinfadt age 80, of Grundy Center, Iowa, formerly of the Cedar Rapids area, passed away on Friday, January 16, 2015 at the Grundy County Memorial Hospital, while under the care of Cedar Valley Hospice. A funeral service will be held at 11:00 a.m. on Monday, January 19, 2015 at St. John's Lutheran Church in Reinbeck, Iowa. Burial will be held privately.

Don was born on September 28, 1934 in LeMars, Iowa, to his parents Herman and Dora (Andressien) Steinfadt. Don served his country in the United States Navy. He was stationed in Korea during the Korean Conflict. Don was united in marriage to Virginia Curwick on December 19, 1961 in Jackson, MN. Together they welcomed their sons Scott and Jim into their family.

Don worked as a heavy equipment operator for many years. He was a proud member of the Operating Engineers Union, Local #234. He retired at the age of 62 from the Dave Schmitt Construction Company. After retirement he spent many happy hours restoring antique construction equipment and tractors.

Don was a member of the American Legion Post #241 in LeMars, Iowa. He was also a member of the Otter Creek Gun Club in Cedar Rapids and a member of the Amateur Trapshooting Association. He enjoyed both trap and skeet shooting. He was fond of fishing and camping, but really loved hunting with his dog Bear. Don was also a pilot and enjoyed flying small aircraft.

Don is survived by his wife of 53 years, Virginia; his sons Scott (Sandy) of Grundy Center, IA and Jim Steinfadt of Blairstown, IA; five grandchildren; a brother Marlan Steinfadt of LeMars, IA; sisters Gladys Kock of LeMars, IA and Mavis Tonne of Fairmont MN; and many nieces and nephews.

He was preceded in death by his parents; a brother Harold and sisters Betty, Delores and Joyce. 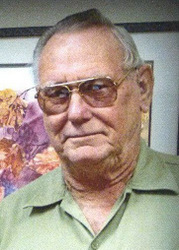