Lillian A. Eiten, 88, of Wellsburg, Iowa died Saturday, January 10, 2015 at Grundy County Long Term Care in Grundy Center, Iowa. A funeral service will be held at 10:30 a.m. on Wednesday, January 14, 2015 at the First Christian Reformed Church, 12419 185th Street in rural Wellsburg, with Pastor Tom Vos officiating. Burial will follow in the First Christian Reformed Church Cemetery. A visitation will be held at the church one hour prior to the service on Wednesday. Arrangements were entrusted to the Doyen-Abels Funeral Home in Wellsburg.

Lillian was born on February 5, 1926, the daughter of Ben H. and Mary Bakker Eiten at her parents' home of rural Wellsburg. She attended Shiloh No. 4 and the Wellsburg Public Schools until her graduation in 1943. She attended Central College in Pella, IA, until her mother's death in 1944. She continued her education at Calvin College in Grand Rapids, MI, in 1950. As she began teaching, she continued her education, received her master's degree in education from the University of Northern Iowa.

She was a career teacher in Christian schools, teaching middle school and high school students. The schools spanned many parts of the United States; Denver, CO; Lansing, IL; Bellflower, CA; North Haledon, NJ; and Walnut Creek, CA. Because the Christian schools varied in size, she supplemented the usual English courses-literature and composition being her favorite- by teaching subjects such as Latin, Home Economics, and even Typing. When asked "Which school was your favorite?" She usually replied, "The one I was teaching in at that time."

Lillian had many favorite hobbies: reading, playing piano and organ, sewing and crafts, gardening, and walking her dog. She was always interested in 4-H and library activities.

She served in many capacities, from Bible study leader to small prayer group participant, from CBI prison ministries to library boards.

Her frequent traveling excursions spread from escorting high school students to central Europe to the many tour and private trips she took to the Holy Land and Greece, to the Scandinavian countries and also to Australia and New Zealand. 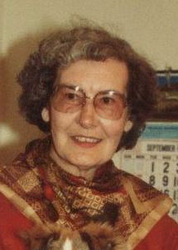