Ethel Mae Petersen, formerly of Reinbeck, and more recently of Marion, IA, passed away peacefully on February 10, 2014 at St. Luke's Hospital in Cedar Rapids, IA. A memorial service will be held on Saturday, February 15th at 10:30 A.M. at the Union Congregational United Church of Christ in Reinbeck with Rev. Joel officiating. Memorial visitation will be held on Friday, February 14th from 5 to 7 P.M. at the French-Hand Funeral Home in Reinbeck. Inurnment will follow the memorial service at the Reinbeck Cemetery. Memorials may be directed to the family.

She was born June 27, 1921 in Ferguson, Iowa, to Amos Idso and Velma "Mae" Culp Idso Wilson. She spent her childhood growing up in Ferguson, New Providence, Fort Dodge and Eldora, IA, where she graduated from high school. She then attended cosmetology school in Cedar Falls and worked as a hairdresser until her marriage to the love of her life, Ernst Petersen, on Sept. 6, 1946, exactly one year after their first date. They raised their family and farmed together, first on a farm north of Reinbeck and later a farm west of Reinbeck, until finally settling in their retirement home in Morrison, and then later at Westview Estates in Reinbeck. Ever the "city girl," she learned to live as a farm wife with her new family: she learned to drive a tractor, to plow and disc alongside Ernst every spring and fall, and to cook the Danish staples like hard rye bread, apple cake, Aebleskivers (puffy pancakes) and much more that she picked up from her mother- and sister-in-law. If she could dote on someone  her husband, her children, her grandchildren  she would. She later was employed by Grundy County Memorial Hospital in food services. Always a friend to everyone she met, she enjoyed socializing with a large group of their closest local friends - "The Gang" - at their monthly pot luck dinners and family get-togethers; the yearly family reunion, the "Petersen Christmas," and any other family outing was at the center of Ethel Mae's social calendar. Ethel Mae and Ernst belonged to several card clubs where they played their favorites  500 and pepper. But most of all, the two enjoyed dancing regularly at "Electric Park" in Waterloo and any other town with a dance floor and a band. They traveled on many bus tours throughout the US and visited every state except Hawaii. In later years, they traveled to Florida every Christmas to spend time with daughter, Velma and family, until they were no longer able. 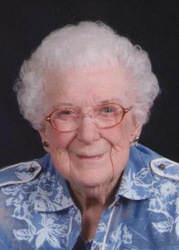