Verna Isabel Dutton Packer, 77, entered into eternal rest on March 26, 2014 in Arlington, WA. Graveside services will be held at Conrad Cemetery, Conrad, Iowa on Saturday, April 5, 2014 at 11:00 am. The Conrad Chapel of the Anderson Funeral Homes has been entrusted with the arrangements.

In eternal life Verna has been reunited with her grandson Marques Allen Kapayou; her parents; sisters Thelma Packer, Elaine Lenox and Colleen Dutton. 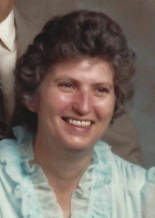