Mildred was born September 5, 1909 to Roy M. and Nellie Beard Williamson in Des Moines, Iowa. A sister, Dorothy and a brother, Clifford were born in 1911 and 1913, respectively. Shortly after the birth of Clifford, Mildreds mother, Nellie passed away and Clifford died a few months later. In 1916, Roy married Alice Estella Hoff in Des Moines. A brother, Robert was born in 1919. In 1920, the family moved to a farm in Wright County, where they lived and farmed with Estellas parents. In about 1924, the family moved to Clarion, where Mildred graduated from Clarion High School in 1926, at the age of 16. Due to her young age, Mildred stayed at home and pursued post graduate work at Clarion H.S. She then began teaching in Wright County country schools at the age of 19 in 1928. She soon began college and attending summer classes at Iowa State Teachers College (now University of Northern Iowa), and finished a 2 year program for a teaching certificate in 1934. She taught lower grades in Rowan, Cresco, and Perry schools until 1943, when she married Paul Furland. As Paul was a soldier in the Army Air Corps, she joined him at his station in Midland, Texas, and taught elementary school there until 1945. As World War II ended in 1945, Mildred returned to Iowa followed shortly by Paul after his discharge. Their first son, Loren was born in November of 1945, followed by a daughter, Linda in November of 1946. They lived in Conrad in 1946 while Paul worked at the Conrad Co-op and helped on the home farm. In 1947, Mildred and Paul moved to a farm 3 miles north of Conrad, where they resided until 1975. Two more sons were born, Theodore in February of 1948 and James in January of 1951. Mildred resumed teaching in 1962, and taught in elementary schools in Eldora, Union- Whitten and Gladbrook until she retired from teaching in 1970. She completed her bachelors degree in elementary education at State College of Iowa (now UNI) in 1966, at the age of 56. Mildred and Paul moved to Conrad in 1975, where they resided until Pauls death in 1982, and where she continued to live until 2009. She then moved to Mallard Point Retirement Home in Cedar Falls, where she lived until her passing. She was of strong Christian faith, active in Alice Church of God, Order of Eastern Star, American Legion Auxiliary, Mid-Circle Club, and was a Girl Scout leader. In later years, she volunteered at the Conrad Library. In addition to her strong faith, her main interests in life were her family and the well- being, education and successes of her children and grandchildren.

Mildred is survived by her daughter, Linda Corbin of Cedar Falls, and her sons Loren (Nancy) of Lake Wales, FL, Theodore (Marion) of Pompano Beach, FL, and James of Waterloo, along with 9 grandchildren and 5 great grandchildren. 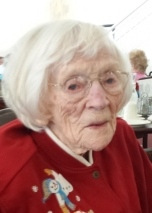