Bernard worked at Phelps Implement most of his career. He began as a mechanic and then became a Service Manager. He retired from Phelps as a mechanic but kept busy working part-time at H & H in Wellsburg.

Bernard was a long time member of the American Lutheran Church. He was a member of AMVETS 17. He enjoyed tinkering on everything and anything he could, especially small engines. Bernard was an avid fisherman and loved his fishing trips to Lake City, Minnesota. He and his wife Margaret loved to play Pepper together with friends. However, his true joy in life came from spending time with his family, especially his grandchildren.

Bernard is survived by his daughter Cheryl (Larry) Kunch of Newton, IA; granddaughters Geri (Joshua) DeGoey and Stephanie Kunch (Justin Huggins) and two great-grandchildren who are on their way; brothers Pete (Nancy)Venenga and Elton Venenga and sisters Ann Bettenga, Doris Roberts, Marcia Stumpf and Becki (Eric) Jacobs and many nieces and nephews. He was preceded in death by his parents, his wife Margaret; infant son Brian, brother Keith Venenga and sisters DeElda Zumbrunnen and Carol Holmes. 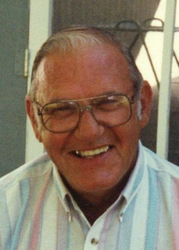