Harry Thomas Beebe, 91, of Cedar Falls, died Wednesday, December 24, 2014, at Western Home Communities Elizabeth Martin Health Care Center. He was born July 25, 1923, in Waterloo, the son of William Ernest and Myrtle (Farr) Beebe. He married Carrol M. Ohrt September 26, 1947, at Union Congregational Church in Reinbeck, Iowa. Harry was a graduate of Waterloo East High School. He enlisted in the United States Navy in 1941 and served honorably during World War II. After his military service, Harry worked for John Deere Product Engineering for 34 years, retiring in 1982. He and Carrol spent the winter months in New Braunfels, Texas, until the winter of 2007. He was a member of Union Congregational Church of Christ in Reinbeck and American Legion Post No. 242, Reinbeck.

Harry was preceded in death by his parents; a sister, Kathryn Louise Azbill.

Funeral services will be 10:30 a.m. Tuesday, December 30, 2014, at Reinbeck United Church of Christ with inurnment in Reinbeck Cemetery, both in Reinbeck. Military Honors will be conducted by Reinbeck American Legion Post 242. Visitation will be from 4:00 to 7:00 p.m. Monday, December 29, 2014, at Dahl-Van Hove-Schoof Funeral Home in Cedar Falls, and also one hour prior to services at the church. Memorials may be directed to Reinbeck United Church of Christ and Cedar Valley Hospice. 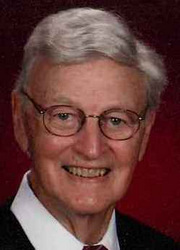