Betty was born to Bess Marie Aldrich Paul and Harry Hulbert Paul on October 25, 1912 in Dallas County, Iowa. She passed away on Thursday, January 22, 2015 at the Kavanaugh House on 56th Street in Des Moines, Iowa.

Betty grew up on the farm in Dallas County, but spent several years in Burbank, CA, where her family moved for the health of older sister, Maxine. Betty graduated from Burbank High School in 1930, where she was captain of the basketball team and the valedictorian of her class. In 1934, she graduated from Iowa State Teachers College (UNI) with a degree in Physical Education, at a time when most young women did not go to college. Betty was very active in Orchesis (dance), Women's Athletic Association, and Scholastic Society; and during a couple of summers, she worked in the lodge at Yellowstone National Park.

She started teaching in Redfield, IA, for $75.00 a month, and then she got a call from the Grundy Center Schools to start a physical education program there. She taught for two more years then married Arthur V. Dieken on June 5, 1937. To this union were born 3 children: Judy Marie, Jane Elizabeth, and John Paul. Betty was very active in her Grundy Center Life. She helped start the Girl Scouts in Grundy Center, led a Brownie troop, led a Cub Scout den, was president of the PTA, was president of the Grundy Women's Club, was Worthy Matron of Eastern Star, and helped start a chapter of Rainbow Girls. She was a member of Bethany Presbyterian Church and was very active in her Women's Circle and on other church committees. She also did substitute teaching, and was a member of First Towners, an adult county extension group that enjoyed cooking, sewing and craft activities. Other hobbies included watching all sports, going golfing, and dancing ballroom style, all of which she enjoyed with Art, and continued to enjoy after his death in the summer of 1977.

Betty and Art also enjoyed spending winters in Arizona and doing a bit of traveling to other countries. Betty continued both, becoming quite a world traveler. She will long be remembered for her adventurous and fun loving spirit, as well as her abundance of energy!

The family would like to thank Silvercrest at Woodlands Creek Assisted Living and Memory Care, as well as Kavanaugh House for Betty's excellent care. Memorial contributions may be made to: Bethany Presbyterian Church, 315 G Avenue, Grundy Center, IA. 50638. 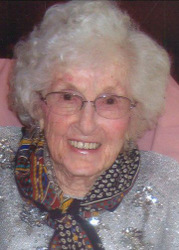