Henry O. Nederhoff, son of Odie and Eita Bunger Nederhoff was born on November 7, 1927 on his parent's farm south of Wellsburg, Iowa. He received his education at the Shiloh #8 Country School. On November 10, 1949 he was united in marriage to Lorraine B. Cuffel. The couple resided on their farm south of Wellsburg. Henry was member of the First Baptist Church in Eldora, having served as trustee and usher for several years. He was a man who loved the Lord, loved life and loved helping others. His family was very special to him.

In addition to his wife Lorraine, he was preceded in death by his parents; son, Ron Nederhoff; brothers, George and Art Nederhoff; and sister, Pearl Van Soelen. 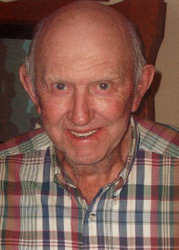