Benjamin Primus, 86, of Eldora, died from natural causes on Wednesday, April 18, 2007 at the Valley View Nursing and Rehabilitation Center in Eldora. Funeral services will be held Saturday at 10:00 a.m. at the United Methodist Church in Eldora with Pastor Richard Boatman officiating. Burial will follow in the First Christian Reformed Cemetery in rural Wellsburg. Visitation is Friday from 4:00 p.m. to 8:00 p.m. at Creps-Abels Funeral Home in Eldora. Memorials may be directed to the family.

Benjamin was born November 14, 1920 in Grundy County, Iowa, the son of William and Jennie (Beninga) Primus. He was raised on a farm in Grundy County and finished 8th grade at Shiloh #9 Pine Creek School. On February 22, 1946 he was united in marriage to Henrietta Heikens at the First Christian Reformed Church in rural Wellsburg. Ben served his country during WWII, serving overseas in the front lines for 18 months in the 102nd Infantry Division. Ben owned and operated a farm in Hardin County near Eldora. Ben was a longtime 4-H leader. He was a member of the United Methodist Church in Eldora, the Methodist Men and a longtime Sunday school leader. He was on the Board of Directors of Mid American Dairy Association, and a member of the Eldora American Legion. Ben and Henrietta delivered Meals on Wheels. Ben enjoyed his family, friends and his Sunday school class. Ben enjoyed farming, his livestock and was a good conservationist and steward of the land. Ben liked to give the grandchildren rides on the tractor.

He was preceded in death by his parents: Will and Jennie Primus; a grandchild: Mathew Reindl; a brother: Herman Primus; and a sister: Harriett Dykstra. 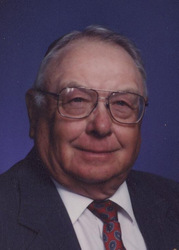