Louise A. Nederhoff, 87, of Wellsburg, Iowa, died Sunday, April 8, 2007, at Allen Memorial Hospital in Waterloo, Iowa. Funeral services will be 1:30 P.M., Thursday, April 12, 2007, at First Christian Reformed Church, rural Wellsburg, Iowa, with Pastor Tom Vos and Pastor Bruce Baillie officiating. Burial will follow at the church cemetery. Visitation will be Tuesday, April 10, 2007, from 4:00 P.M. to 8:00 P.M., at Doyen-Abels Funeral Home in Wellsburg. Visitation will also be Thursday morning from 8:00 A.M. to 11:00 A.M., at the funeral home. The family will be present on Tuesday evening to greet friends. A memorial fund has been established.

She is survived by two daughters-Carolyn Nederhoff of Wellsburg, Iowa; Susan Harms and her husband Mark of Eldora, Iowa; three grandchildren-Allison, Brett and Brandon Harms of Eldora, Iowa; one sister-in-law Margaret Luiken of Steamboat Rock, Iowa; and many nieces and nephews.

She was preceded in death by her parents; her husband Theodore; and three brothers-Ernest, Raymond, and Russell Luiken. 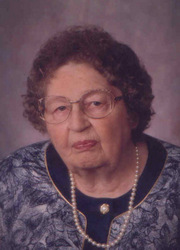