Pearl Evelyn Harms, 95, of Wellsburg, Iowa went to be with her Lord and Savior on Thursday, December 13, 2012 at the Presbyterian Village in Ackley, Iowa. She had been a resident there for 7 years. Funeral services will be at 10:30 am on Saturday, December 15, 2012 at the First Christian Reformed Church in Wellsburg, Iowa with Pastors Tom Vos and Bruce Baillie officiating. Burial will follow in the church cemetery. Visitation is from 6 pm to 8 pm on Friday, December 14 at Creps-Abels Funeral Home in Eldora, Iowa.

Pearl Evelyn Heetland was born March 1, 1917 to Paul and Florence (Geerdes) Heetland. She was the oldest of seven children. She graduated from Ackley High School in 1932 at the age of 15.

On April 20, 1938 she was united in marriage with Louis Meints. They made their home east of Steamboat Rock. This union was blessed with three children, Larry, Dennis and Lois. Louis passed away on September 8, 1950 after a lengthy illness. Pearl remained on the farm with assistance from Louis' brother, George.

On November 4, 1966 she was united in marriage with Marlin Harms. They made their home south-east of Wellsburg until moving into town. Marlin passed away on June 15, 1979.

Pearl is survived by her sons; Larry and Dennis (Bobbi) Meints of Steamboat Rock; daughter, Lois (Neil) Hoelscher of Perry; by Marlin's children, Gerry (Marilyn) Harms of Pella and Ann Cuvelier of Sheldon; and by 18 grandchildren and many great-grandchildren. Also surviving are brothers, Elmer, Virgil and Gordon Heetland and many nieces and nephews.

She was preceded in death by husbands, Louis and Marlin; her parents; sister, Gladys Bakker; brothers, Kenny and James Heetland, who died in childhood; and her daughter-in-law, Dee Meints. 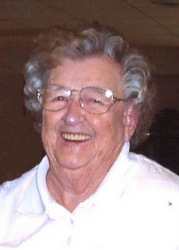