He was born August 16, 1938 at Grundy Center, Iowa, the son of Charles A. and Jenny (Looff) Rhoads. Richard graduated from Grundy Center High School in 1958. He married Gayle Brown June 17, 1960 and they were later divorced. He married Belva Nederhoff December 18, 1990 at Waterloo. Richard worked for John Deere for many years, retiring in 1997. He and Belva enjoyed their many rides on their motor cycle, loved going south for the winter and he particularly enjoyed helping farmers after his retirement.

Richard was a veteran of the United States Navy.

Funeral services will be 1:30 p.m. Tuesday. September 21, 2010 at Dahl-Van Hove-Schoof Funeral Home with burial in Cedar Valley Memorial Garden, both in Cedar Falls. Visitation will be 5-7 p.m. Monday, September 20, 2010 at Dahl-Van Hove-Schoof Funeral Home and one hour before services on Tuesday. Cedar Falls AMVETS post #49, will conduct military honors. In lieu of flowers memorials may be directed to Care Initiatives Hospice, Cedar Falls. 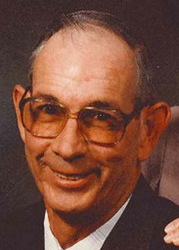