Alma J. Bergmann, 75, of Grundy Center, Iowa, died on Tuesday, December 28, 2010 at the Grundy County Memorial Hospital Long Term Care Unit in Grundy Center. Funeral services will be at 10:30 am on Friday, December 31 at the United Reformed Church in Wellsburg, Iowa with Pastor Matt Nuiver officiating. Burial will follow in Shiloh Cemetery in Wellsburg. Visitation is from 5pm to 7pm on Thursday at Engelkes-Abels Funeral Home in Grundy Center.

Alma was born November 5, 1935 in rural Grundy County, Iowa near Fern, daughter of Henry L. and Hannah (Schiller) Aswegan. She was raised in Fern and on May 3, 1957 was united in marriage to Clifford Bergmann. They made their home near Wellsburg where they farmed and raised their sons, Delwyn and Wendall. Alma enjoyed winter vacations in Arizona with Clifford before his death on November 9, 1995. Alma moved to Grundy Center shortly after Clifford's death.

She was a former member of the Salem Lutheran Church where she was active with their women's groups, teaching Sunday school, and playing the organ and piano. She joined the United Reformed Church in Wellsburg after Salem Lutheran dissolved.

She is survived by her sons, Delwyn and his wife, Bonnie of Sumner, Iowa and Wendall Bergmann of Waterloo; grandchildren, Alyssa, Ryan , Jessica and Katelynn Bergmann; great-grandson, Ethan; and sister, Henrietta Byl of Grundy Center.

She was preceded in death by her parents; husband, Clifford; brother, Harold Aswegan; and a sister and infant twin brothers. 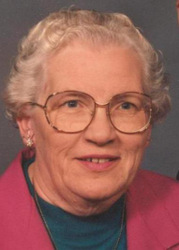