Pastor John C. Zimmermann, 96, of Vinton, formerly of Eldora, passed away on Tuesday, December 7, 2010 at The Lutheran Home in Vinton. He had a humble and confident trust in his gracious Savior and died peacefully in the arms of the Good Shepherd. Funeral services will be held at 10:30 am on Monday, December 13 at St. Paul Lutheran Church in Eldora with Pastor David Splett officiating. Burial will follow at the City Cemetery in Eldora. Visitation will be held from 4 pm to 8 pm on Sunday, December 12, at Creps-Abels Funeral Home in Eldora.
Memorials can be made to the St. Paul Lutheran Memorial Fund, Concordia Seminary Scholarship Fund, or The Concordia Historical Institute.

John was born January 9, 1914 in Burt, Iowa, the son of Mike and Frieda (Riggert) Zimmermann. He received his elementary education at Burt and Algona, Iowa. After confirmation and graduation from the parochial school at Algona in 1927, he enrolled at Concordia, St. Paul, MN, where he completed his high school and college training in 1933. That same year he entered Concordia Seminary, St. Louis, MO and graduated from the Seminary in 1937.

On June 5, 1938, he was united in marriage with Mae Etta Wheat at St. Paul Lutheran Church, Ft. Dodge, IA. Their marriage was blessed with five children.

In 1970 Rev. Zimmermann was elected President of Iowa District East of The Lutheran Church-Missouri Synod. He served in this position while serving the Eldora congregation until 1974 when the presidency was made full-time; John and Mae Etta then moved to Marion, IA. In the church at large, he served as International Counselor of the LWML and was a member of the Board of Governors of the Concordia Historical Institute, St. Louis. In December 1976, Rev. Zimmermann received a Doctor of Divinity Degree from his Alma Mater, Concordia Seminary, St. Louis. God enabled him to be a faithful and loving servant to the Church and Gods People.

John and Mae Etta retired in Eldora in 1982 where he served as Visitation Pastor for 5 years. They moved to the Lutheran Home in Vinton in 2002. Over the years they led many tours to Germany and the Holy Land. John also enjoyed wood working, gardening, and growing roses.

He was preceded in death by his beloved wife, Mae Etta, on March 1, 2010; his parents Mike and Frieda Zimmermann; three brothers Harold, Reinhardt, and William and one sister Hulda Menz. 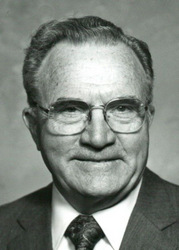