Faye M. Daleske, 85, died on Monday, December 6, 2010 at the Valley View Nursing and Rehab Center in Eldora, Iowa. Funeral services will be at 2 pm on Sunday, December 12, 2010 at St. Paul Lutheran Church in Eldora with Pastor David Splett officiating. Burial will follow at the Eldora City Cemetery. Visitation is from 2 pm to 4 pm on Saturday, December 11 at Creps-Abels Funeral Home in Eldora. Memorials may be directed to Fayes family to be used for needs at St. Paul Lutheran Church and Valley View Nursing and Rehab Center.

Faye was born October 10, 1925, in Grundy County, Iowa, daughter of Ross and Olivan (Robinson) Starn. She graduated from Eldora High School and on February 12, 1946 was united in marriage to Harry Carl Daleske. Faye and Harry made their home on their farm between Iowa Falls and Eldora where they raised three daughters, Linda, Kathleen and Dianne.

She was a member of St. Paul Lutheran Church where she was involved with the Ladies Aid and taught Sunday school, and was also a former member of the Farm Bureau serving as chairman for many years. Faye enjoyed gardening, sewing, cooking, crocheting, and was very artistic and musical. She also enjoyed feeding and watching the birds, and caring for her pet cockatiel Fritzie. Faye was a caring and gentle person enjoying her family and grandchildren, and will be dearly missed.

She is survived by her daughters, Linda Friede of Peoria, Illinois, Kathleen and her husband Jerry Sindt of Holstein, Iowa, Dianne and her husband Patrick Schwendinger of Ankeny, Iowa; sisters, Doris Shogren of Bossier City, Louisiana and Mary June (John) Reece of Tucson, Arizona; sister-in-law, Mary Alice Starn of Lake Mills, Iowa; and by eight grandchildren and 12 great grandchildren.

She was preceded in death by her husband, Harry on December 5, 1998; her parents; and son-in-law, Allan Friede. 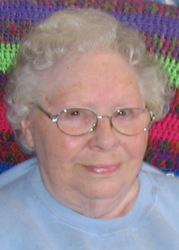