Doris Leila Webner Palmer, 87, formerly of Holland, died Monday, October 4, 2010 at the Westbrook Acres Nursing Home in Gladbrook while under the care of the nursing staff and the Cedar Valley Hospice. Funeral services will be held on Thursday, October 7, 2010, 10:30 am at the United Methodist Church in Grundy Center with Pastor Matt Miller officiating. Visitation will be held one hour prior to services at the church. A private family burial will take place following funeral services. Memorials may be directed to the family.

Doris was born July 5, 1923 in Klemme, Iowa, the daughter of Daniel and Alice (Quick) Webner.

Willard and Doris lived in Clear Lake, Iowa and later made their home in Holland, Iowa.

Doris enjoyed making Sunday dinners for her family, and having morning coffee with her neighbors. She especially loved spending time with her family, grandchildren and neighbors. 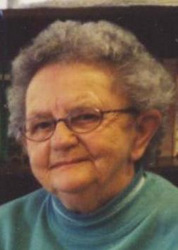