Darleen Haren, 84, of Grundy Center, passed away on Wednesday, September 22, 2010, at Allen Memorial Hospital in Waterloo. Following Cremation, memorial services will be held at 10:30 am on Saturday, September 25, 2010 at the United Methodist Church in Grundy Center with Pastor Matt Miller officiating. Private family burial will follow in Rose Hill Cemetery in Grundy Center. Visitation will be from 4pm to 7pm on Friday at Engelkes-Abels Funeral Home in Grundy Center. Memorials may be directed to Darleens family.

She was an active member of the Grundy Center United Methodist Church where she had sang with the choir and help at various church activities. She was a former member of the AMVETs Auxiliary, a member of Town and Country Golf Club, and card club. Her hobbies included dancing, golfing, bowling, sewing, gardening, watching spectator sports, and reading; and she especially enjoyed her family. 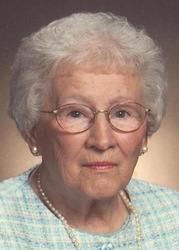