Dot was born December 13, 1934, in Waterloo, Iowa, the daughter of Harold and Clara (Siglin) Bishop. Dot was born and raised in Waterloo attended Waterloo schools and graduated from East High School in Waterloo. After graduating from high school Dot attended Kirkwood College in Cedar Rapids. In 1954, Dorothy was united in marriage to Gary Abernathy at the Little Brown Church in Nashua, Iowa. He preceded her in death. On March 5, 1977, Dorothy was united in marriage to George Potts at First Presbyterian Church in Cedar Falls, Iowa. After their marriage, they lived in Cedar Falls where Dorothy worked at the Cedar Falls Library. And in 1978, they moved to Grundy Center. Dot then was a librarian at the Grundy Library retiring in 1998 after working there for twenty years. She was a member of the First Presbyterian Church in Grundy Center. Dot loved to spend time with her friends and family.

She is preceded in death by her parents: her husband, George; one step- grandson Scott Rhoades and three sisters, Norma Bush, Millie Berry, and Shirley Smith. 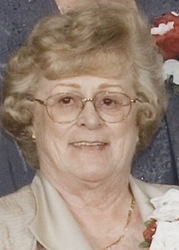