Wayne Eldon Fonken, 85, of Carbondale, Colorado, formerly of Grundy Center, Iowa, passed away peacefully at his home on August 8th, 2010, surrounded by his loving family, in the care of Hospice of the Valley. Funeral Services will be held at 11:00 a.m. on Saturday, August 14th at Engelkes-Abels Funeral Home in Grundy Center, with Pastor Tom Bower Officiating. Visitation will be one hour prior to the funeral service. Burial will follow at Rosehill Cemetery, Grundy Center with military service conducted by the Grundy Center American Legion Post #349 and AMVETS # 17.

Wayne was born May 3rd, 1925 in Grundy Center, Iowa. He was the only child of Walter and Grace (Kluver) Fonken. He married Betty Flickinger on Dec 3rd, 1950 in Independence, Iowa.

Upon graduation from Grundy Center High School in 1943, he joined the Navy and served on the Destroyer U.S.S Foote DD511 as part of the Little Beaver squadron in the South Pacific. After the war ended, he worked with his father at Walters Oil Company. He also enjoyed driving the school bus for Grundy Public Schools. In 1972, he and his family moved to Carbondale, Colorado where he owned and operated Massco Janitorial Supply Co. After selling Massco, he was employed by WalMart for almost 20 years, until retiring at age 80.

Wayne loved and cared for his family deeply. He was a kind and gentle soul with many friends. He also had a passion for running and began participating in marathons after age 50; including the Leadville 100 and the Pikes Peak Marathon.

He was preceded in death by his parents Walter and Grace, and grandson Glenn. 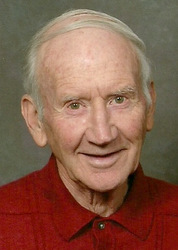