Janet was born in Pleasant Valley Township in rural Grundy County on March 29, 1916, the daughter of Henry and Lena (Groen) Peters. She attended rural schools. Janet lived her whole life in Grundy County. Before her marriage, Janet worked as a hired girl and earned from one to four dollars a week.

On February 9, 1938, she was united in marriage with Ernest Flater. She and Ernest farmed in Lincoln and Colfax Township. Janet worked alongside her husband until their retirement in 1977. Janet was member of Bethany Presbyterian Church for 71 years

Janet loved gardening, playing cards, and visiting with friends, fishing and camping, but most of all she loved spending time with her family.

She was preceded in death by her parents, Henry and Lena Peters; husband, Ernest; one brother, and sister. 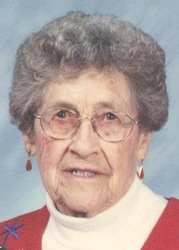