Lois was born on December 7, 1926 in Dysart, Tama County, Iowa to her parents Addison and Beryl Hollenbeck. She was raised in Dysart and graduated from Dysart High School in the Class of 1945. As a young woman Lois moved to Waterloo.

She was united in Marriage to her first husband LaVerne Ingersoll on September 28, 1947. LaVerne passed away on February 2, 1991. On November 17, 1991 Lois was united in marriage to her second husband Charles D. Barfels, Sr. She then relocated to Grundy Center, Iowa and made it her home for the remainder of her life.

Lois was an avid gardener, she enjoyed visiting the casino, and she loved to read suspense and romance novels. She was a devoted wife, mother and grandmother and she will be missed and long remembered by her friends and family.

She is preceded in death by her parents, her husbands LaVerne Ingersoll and Charles Barfels Sr.; her sisters Blanche Whitlach and LaVone Bednar and her grandson Nicholas Ingersoll. 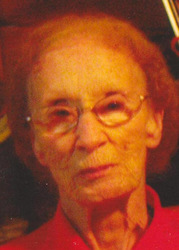