Marjorie M. Johnson, 88, of Dike, passed away on Friday, June 11th, 2010 at the Maple Manor Village in Aplington. Funeral services will be held on Tuesday, June 15th, 1:30 pm at the Dike United Methodist Church in Dike with Pastor Dan Ridnouer officiating. A visitation will be held on Monday, June 14th from 6 to 8 pm at the Engelkes-Abels Funeral Home Dike Chapel, 680 Main St., Dike, IA. Interment will be held at Greenwood Cemetery in Cedar Falls. In lieu of flowers, memorials may be made to the Dike New-Hartford Dollars for Scholars Program and the Dike Public Library.

Marjorie was born on December 24, 1921 in rural Grundy County, the daughter of Irving and Sarah (Carroll) Lovell. She grew up in the Reinbeck/Dike area and attended country school. She graduated from Dike High School in 1939. Margie was introduced to Wayne Johnson by a mutual neighbor and the couple began dating. The two were united in marriage on June 22, 1940, in Grundy County. Margie and Wayne lived on the Johnson family farm in rural Dike. Their children are son Stanley (deceased) and daughter Gail. They lived there all of their married lives, and Margie continued living there after Wayne passed away on December 2, 1998.

Margie was a stay at home mother and also worked as a waitress at the Barn Café in Dike for over 40 years, retiring in 2002 at the age of 80.

She enjoyed gardening, sewing, reading, crocheting, playing cards, shopping with her sister-in-law Helen and socializing. She was an especially great cook and baker. Most importantly, she loved spending time with her family and loved being with her grandchildren. 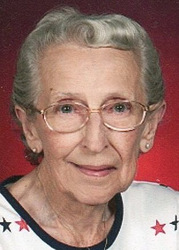