Winona B. Tordoff, 83, of Conrad, formerly of Wellsburg, passed away on Monday, March 8, 2010 at the Oakview Nursing Home in Conrad. Visitation will be held on Wednesday, March 10th from 5 to 8 P.M. with a prayer service at 7 P.M. at Creps-Abels Funeral Home in Eldora. Interment is private.

Winona was born on June 4, 1926 in Hardin County, Iowa, the daughter of Cleon & Hattie (Hoyte) Vieman. She was born and raised in the Eldora area, graduating from Eldora High School. She was united in marriage to Edward J. Tordoff. The couple primarily lived in Eldora, where they raised their 4 children. After Edward passed away, Winona relocated to Wellsburg and later transferred to the Oakview Nursing Home in Conrad in 2003.

She was an active member of the First Baptist Church in Eldora, the VFW Auxiliary and the American Legion Auxiliary.

She was preceded in death by her parents; husband Edward; brothers Lowell and Wayne Vieman; brothers-in-law Dale Landt & Gilbert Mannetter. 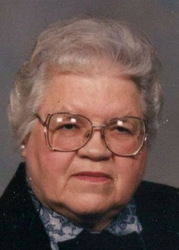