Shirley A. Fulkerson, 95, of Reinbeck, passed away on Friday, March 5, 2010 at her home while under the care of the Cedar Valley Hospice. A Mass of Christian Burial will be held on Wednesday, March 10th, 2010 at 10:30 A.M. at St. Gabriel Catholic Church in Reinbeck with Father Dennis Quint officiating. Burial will follow the funeral mass at the Reinbeck Cemetery. Visitation will be held on Tuesday, March 9th from 5 to 8 P.M. with a rosary service at 8 P.M. at French-Hand Funeral Home in Reinbeck.

Shirley was born on July 8, 1914, in Reinbeck, Iowa, the daughter of Elwood James and Ella (Willer) Watson. She was one of seven children and was born and raised in Reinbeck. She attended school in Reinbeck, graduating from Reinbeck High School in 1931. She was united in marriage to Joseph G. Doc Fulkerson on October 22, 1939 at the Sacred Heart Catholic Church in Grundy Center, IA. The couple settled in Reinbeck and welcomed a daughter, Mary Sue. Shirley worked at her parents restaurant in town called Watsons Café, later purchasing it from them and running it with her husband. She then became a full time homemaker and worked seasonally for Pioneer Seed Company.

She was a member of St. Gabriel Catholic Church and the American Legion Auxiliary. Shirley enjoyed reading, birds and was an avid sports fan who enjoyed watching golf, football, baseball and especially loved to watch the Chicago Cubs. Most importantly, she enjoyed spending time with her family. Shirley was a woman of much strength and courage and was a woman who was strong in her faith. 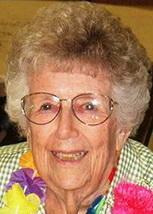