Donald was born October 6, 1926, in Eldora, Iowa the son of Glenn and Mary (Wright) Strickler. He was raised in Grundy Center, Iowa and graduated from Grundy Center High School in 1944. Donald served his country proudly in the United States Air Force from April 5, 1945, to November 2, 1945, and then was called back to duty from July 28, 1950, to September 28, 1951, during the Korean War. On September 23, 1950, in Waterloo, Iowa he was united in marriage to Irene Bernice Mussett. The couple made their home in the Grundy Center area where they farmed most of their married life. After retiring Donald liked to do woodworking and also traveling with Irene. Donald was a member of the Grundy Center United Methodist Church. He was a member of the Grundy Center Kiwanis and the American Legion Post #349- AMVETS #17 of Grundy Center. Donald loved to spend time with his family and friends. 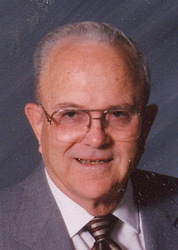