Harm Rust was born March 13, 1920, in Wellsburg, Iowa, the son of Aise and Tena (Bruns) Rust. He received his education at country school in rural Wellsburg. On February 20, 1942 he was inducted into the U.S. Air Force serving his country during World War II for 4 years in Africa and Italy. On November 17, 1950, Harm was united in marriage to VerDene Krull at the parsonage of Bethany Presbyterian Church in Grundy Center, Iowa. Harm and VerDene farmed in Grundy County until 1978 when they moved to Grundy Center. Harm then worked for Farm Service in Grundy Center. Harm was a 59-year member of Bethany Presbyterian Church in Grundy Center where he was a trustee, deacon and elder. He was a member of American Legion Post #349 Am Vets #17of Grundy Center. Harm enjoyed woodworking, working in his garden, and being on the pit crew for his son and grandson. He was an avid bowler and pool player. Harm loved to spend time with his family and friends, and most of all he enjoyed his grandchildren.

Preceding him in death were his parents; son, Robert; brother, Raymond; and sister, Delores Olthoff. 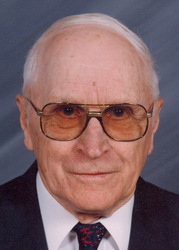