Loretta M. Stull, 92, of Eldora, formerly of Grundy Center, passed away on Thursday, December 10, 2009 at the Eldora Nursing and Rehab Center of natural causes. A Mass of Christian burial will be on Monday, December 14, 2009 10:30 A.M. at St. Marys Catholic Church in Eldora with Father Paul Baldwin officiating. Visitation will be one hour prior at the church. Interment will be at Sacred Heart Catholic Cemetery in Grundy Center.

She is survived by her children Shelley (Frank) Webb of Cincinnati, OH, Melody (Tim) Hoy of Eldora and Tamara Evans of Seattle, WA; grandchildren Ariel and Elizabeth Hoy.

Loretta was preceded in death by her parents; husband Donald who passed away on November 2, 2001; son Father Neal Stull who passed away on September 27, 2009; sisters Mary Rouse, Kathryn Getting and Louise Connell; brothers Leo, Raymond and Francis Bud Connell. 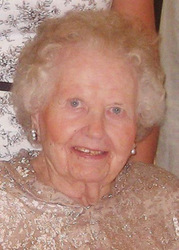