LaRoka Whalin Orr, 98, of Reinbeck, Iowa, died Friday, August 7, 2009, at Carrington Place in Toledo, Iowa. Funeral services will be 10:30 A.M., Tuesday August 11, 2009, at the New Life Assembly of God in Reinbeck, with Pastor Rodger Sieh officiating. Burial will follow at the Woodlawn Cemetery in Toledo, Iowa. Visitation will be Tuesday, August 11, 2009, from 9:45 A.M. until service time at the church. A memorial fund has been established.

LaRoka was born January 13, 1911 in Glenwood, Iowa the daughter of Samuel and Elizabeth (Robinson) Byerly. She graduated from Tama High School in 1928, married Burton Whalin in 1930. They farmed northeast of Toledo (Howard Township) from 1930-1962. Burton passed away in September 1962. She married Donald Orr in 1972 and resided in Arnolds Park (Lake Okoboji) until 1994 when they moved to Reinbeck. Don passed away in 1997. LaRoka was very involved in church and was a member of United Brethren in Toledo, a member of the United Methodist Church in Arnolds Park and a member of the New Life Assembly of God in Reinbeck. She held numerous offices in various clubs, enjoyed gardening was a 4-H leader and was remembered for her expertise in cooking and sewing. She especially enjoyed her friends and family.

She was preceded in death by her parents, her husbands, Burton and Donald; a granddaughter, Kathleen Vest, and three sisters, Ruth Frerichs, Betty Whitney and one in infancy.

Survivors include her two daughters Catherine Dexter of Reinbeck and Dorothy Vest of Toledo, and a son, Dr. George Whalin and his wife Gail of Mendenhall, Mississippi, 10 grandchildren, 21 great-grandchildren and 12 great-great grandchildren; 2 nieces and 2 nephews. 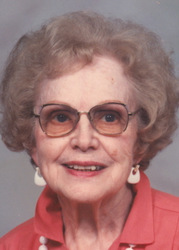