Lois was born September 24, 1923 in Durango, Iowa the daughter of Clarence and Esther (Poston) Luchsinger. She was raised in Durango and graduated from Dubuque Senior High School in 1942. She attended Bayless Business College in Dubuque, Iowa for 2 years. Lois worked at Adam Company in Dubuque as a secretary. On February 11, 1946 she was united in marriage to Warren Glenn Feller. The couple made there home in Grundy Center for 63 years where they owned and operated Feller's Variety Store retiring in 1985. Lois was a member of the Grundy Center United Methodist Church, The United Methodist Women and the Library Board.

Survivors include her husband: Warren; two daughters: Beth Thompson of Reinbeck, Iowa, and Pat Kooiker of Marengo, Iowa, and a son: Larry Feller of Hudson, Iowa; 5 grandchildren and 7 great grandchildren.

She was preceded in death by her son-in-law: Lyle Kooiker; two sisters: Fern Kuhz and Lucille Butter. 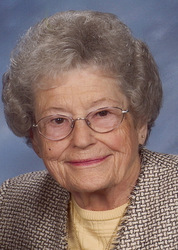