Paul Theodore Rewerts was born July 13, 1916, the son of Jerry and Ramie (Johnson) Rewerts. He was born and raised in rural Ackley and attended rural school. On October 15, 1943, Paul was united in marriage to Bernice May Harken in Ackley, Iowa. They farmed near Ackley and produced seed corn for O's Gold Seed Corn Company of Parkersburg. Paul was partners with his brother-in-law Rionald Gerdes in a John Deere Implement dealership in Aplington, and then later Paul owned the John Deere Implement dealership in Grundy Center. He loved woodworking and antique cars. But most of all he enjoyed spending time with his family and friends. Paul was an active member of Bethany Presbyterian Church.

He was preceded in death by his parents; two brothers, William and Raymond Rewerts and a sister, Annetta Gerdes. 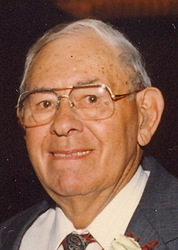