Arthur R. Freese, 89, of Dike, passed away on April 20, 2009 at the Bartels Lutheran Retirement Community in Waverly, IA.

Arthur was born on May 10, 1919 in Aplington, IA, the son of Reibke & Effie (Geiken) Freese. He grew up in the surrounding areas of Grundy and Butler counties.

Arthur and Mabel Poppen were united in marriage February 18, 1942 at the Pleasant Valley Reformed Church. Arthur retired in 1978 and the couple then moved into the town of Dike. As a member of the Reformed Church of Stout, Arthur enjoyed participating in Bible Study Groups. He enjoyed fishing, auctions, but his one true love was farming.

Arthur was preceded in death by his wife of 50 years Mabel, who passed away in 1992; his parents; step-mother Lena; brothers John, LeRoy, Richard, Arnold & Floyd; sisters Ruth, Gladys, Irene, Julie & Rosemary; one step-grandson. 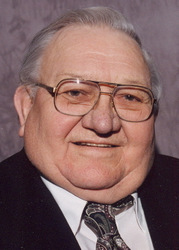