Patricia Joyce Petersen, 81, of Reinbeck, Iowa, died Sunday, April 5, 2009, at her home under the care of her family and Cedar Valley Hospice.

Patricia Petersen was born January 31, 1928 in Independence, Iowa, the daughter of James Kenneth and Dorothy (Rouse) Anderson. Pat lived her early life in Rowley, Montour, Council Bluffs and then moved to Reinbeck where she graduated from Reinbeck High School in 1945. After graduation Pat attended Nurse's Training at Jenny Edmondson in Council Bluffs, Iowa.

On February 18, 1949 in Waterloo, IA, Pat was united in marriage to Harold Jay Petersen. In addition to being a good wife and mother, Pat was active in the community. She was a member of First Presbyterian Church in Reinbeck, Charity Circle, Christian Women's Club, American Legion Auxiliary, Bible Studies, Woman's Club, was a founding member of Oak Leaf Country Club, where she enjoyed bridge with her friends every Tuesday, one of the founders of "After Prom", served on the Reinbeck Centennial Committee in 1976, was a member of the Conestoga Council of Girl Scouts and was leader of Troop 193 for many years. Pat enjoyed volunteering at Reinbeck Elementary School and for many years at Parkview Manor where she later worked as the Assistant Activity Director, retiring in 2003. In her free time Pat enjoyed reading, sewing, quilting and playing Canasta, Pinochle and Bridge.

Preceding her in death are her parents, Kenneth and Dorothy Anderson; sister, Gladys (Cookie) Hirsch and half brother, Jim Anderson. 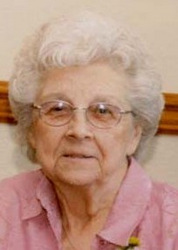